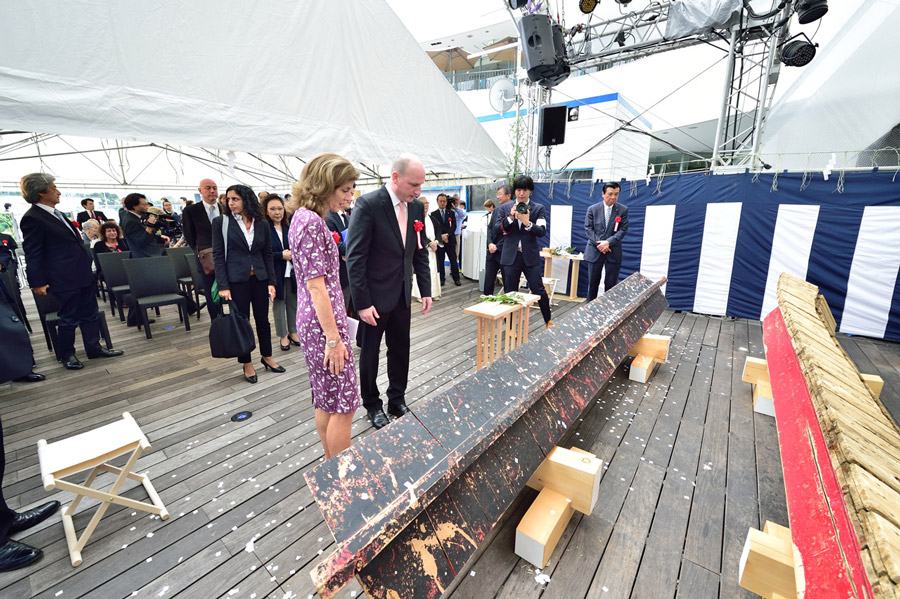 Sometimes, lasting friendships can be forged in the aftermath of epic disaster. In 2011, Japan was rocked by a massive earthquake. The resulting post-quake tsunami was even worse, swamping parts of the island nation, sweeping away everything in its path. Thousands of homes, businesses and historic places of worship were destroyed, the huge wave carrying tons of debris out to sea.

Two years later, tsunami wreckage started coming ashore off the West Coast of the US, the state of Oregon in particular. Most of the wreckage was unidentifiable when it washed up on the shores, having floated over thousands of miles of Pacific Ocean. But on March 22, 2013, a long, beautifully bowed piece of painted wood was found near Oceanside, Oregon. Judson Randall, who first saw and photographed the artifact, felt it was significant and “could have real meaning to the people of Japan.” Painted red and almost over twelve feet in length, the wood was actually a kasagi from a torii gate, two wooden cross beams that mark the entrance to hallowed Shinto shrines. The challenge now was how to find the owners and return the compelling relic back to Japan.

It would take another three years and cooperation between Randall, the Oregon State Parks and Recreation Department and heroes at the Portland Japanese Garden to connect all the dots and find the kasagi’s rightful owner.

Everyone wanted to help. One year went by, no luck. The search was then narrowed down to 100 Japanese shrines in Japan reportedly damaged by the tidal wave. Still no solid answers. Members of the Portland Japanese Garden decided that a trip to Japan would be necessary to finally solve the mystery. They traveled to areas leveled by the tsunami, talking to taxi drivers, hotel proprietors and restaurant owners. They soon learned that the kasagi might have come from the Itsukushima Shrine in Hachinohe. It turned out that the religious artifact did belong to the Shrine, verified by dedication markings made on one of the beams.

Enter YAMATO, who along with Pacific Lumber decided to assist the kasagi’s return to Japan after seeing a news report about the logistic challenges of returning such a heavy artifact. The two pieces of wood weighed over 900 pounds with a span of over 140 inches (12 feet). Seven people carefully lifted and loaded the kasagi into a shipping container destined for Japan. In the months ahead, ceremonies were carried out on both sides of the Pacific, with people sending prayers for the priceless artifact’s safe return and re-dedication.

Because of this action, YAMATO is now tapped for its freight expertise in the shipment of priceless Japanese treasures between the US and Japan. Ever since, Yamato Portland transports fine arts to the Japanese festival, held each October in Portland Japanese Garden, the biggest such garden in the US. What happened since the deadly earthquake is now a symbol of hope, healing and the ties that bind the United States and Japan in friendship now and forever.